Reflecting on the data ethics experiences of Amsterdam, New York and London

In December 2022, LOTI hosted a webinar on Data Ethics in Local Government. We wanted to bring together two cities from other countries, both at the forefront of establishing what responsible data innovation and data ethics look like, but both doing it in their own way – and in different legal and regulatory contexts than us in London. Below is my blog reflecting on the highlights of this conversation.

Joining from Amsterdam was Douwe Schmidt, Amsterdam’s counterpart to my own role as Data Ethicist. Whilst lots of people may know Amsterdam’s work best for their Algorithm Register, it was great to hear about Amsterdam’s other work in this area. This includes Schmidt talking about how he helps teams navigate ethical values in data projects, such as working with transport and smart sensor teams, and his broad journey in expanding the awareness and culture around data ethics.

Schmidt emphasised the relationship with citizens – that citizens need to understand what technology is being used and have a right to say how it is used, in the same way, that a city would involve citizens. This was helped with the Tada manifesto, creating a common language for residents to hold the city to account. Another point that Schmidt stressed, which resonated with our thinking in LOTI, is that data ethics shouldn’t be delegated to an individual (or perhaps even a board). Data ethics already is the responsibility of everyone working in city governments, we are all ‘ethicists’ making value-based decisions and trade-offs in the interest of citizens.

Martha Norrick, the Chief Analytics Officer at NYC Analytics in their Office of Technology and Innovation, then described how her team manages data in New York, and how ethics factors into that. For context, there are 50 organisations working with data in New York, meaning that data is often disconnected, but that there is an enormous amount of potentially useful data. A key role for Norrick’s team then is around open data – stewarding over 3000 datasets to ensure that data is useful to people, and is accessible but is also private and secure.

Around analytics, New York also works to ensure their analytics is appropriately fair and inclusive. As Norrick put it, “who is in this data, and who isn’t in this data, if you are going to responsibly answer a question with a particular dataset?”. Norrick referenced the 311 hotline, where residents call to flag issues in a city, and from which a huge dataset is generated. This dataset may be flawed though, despite some officers wanting to use the dataset to answer different questions. New York has to think about who is calling 311 and who is not calling 311, not everyone uses it equally. For example, are there language barriers for some communities, is there trust in calling the government, and do different generations feel more or less comfortable even using the phone? Actively interrogating this data and its potential biases are needed to use it responsibly – and also accurately.

From LOTI’s side, my colleague Jay Saggar presented our work in London, including our Data Ethics Service and our Recommendations for Local Government Capabilities. Then, I shared some contextual information about what residents think about data. For example,  70%  of Brits want the government to work to higher standards for data protection than what is set out in the law (Sopra Steria, forthcoming), and how government (40% ) is less trusted than any other type of organisation other than social media in managing user data (CDEI, 2020). 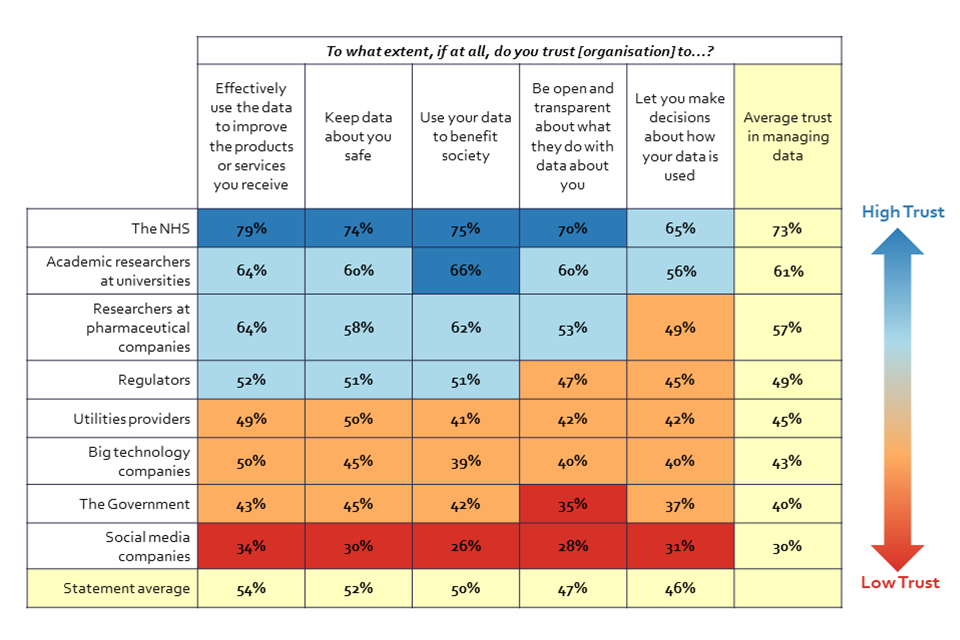 Trust in organisations, and in their actions with data (CDEI, Public Attitudes Tracker Wave 2, 2022)

Our hope in catalysing data ethics practice in local government came through in the final question to guests – how they would advise authorities in starting their data ethics journey. Douwe Schmidt suggested starting with ethics – understanding the values that you build a city on, and understanding how the technologies affect them. In Amsterdam, their foundational principle is taking the rights, interests, and wishes of all concerned into account. Martha Norrick agreed, saying that the values of public service mean that you need to sense-check technologies against moral scaffolding, but emphasised that this is an exciting practice to work on!

On reflection, I really liked how this conversation managed to capture the foundational emphasis on understanding moral values and how they are articulated or contested in data technologies, but in the context of specific applications or practices. Developing data ethics as a practice will require more of this type of shared learning of specific work, so cities across the world can build on the insights and experiments of others. I’m delighted to see London and LOTI playing a role in this, and hope to continue that long into the future.