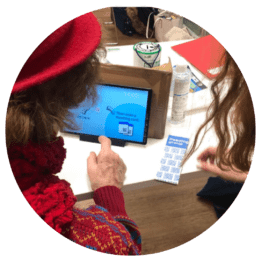 Recruiting community groups to engage with testing and feedback

In order to have confidence that the kit would be used successfully by people living with dementia in their own homes, we first tested it with participants at three dementia community groups. The groups and volunteers were identified through existing local authority contacts and a LOTI Show & Tell.

We took the prototype kit to three community groups and got participants to test the kit by joining a Zoom call with a member of our team. Community group leads directed us to people whose level of dementia would allow them to take part and who are more isolated or digitally excluded.

As well as doing Zoom calls, our team used the tablets to show participants places of interest on Google Earth. This is something the group organisers were keen to offer participants and it helped build the relationship between the group and our team. 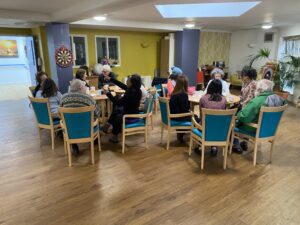 Testing prototypes at a community group 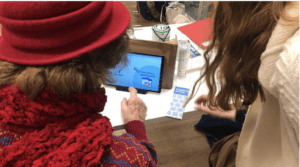 Demonstrating how to use the prototype at a community group 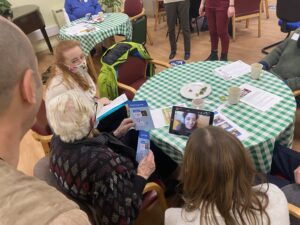 QR code alignment: When operating the kit, participants generally struggled to line up the QR code on the Zoom Ticket with the camera on the tablet. This led to experimenting with different ticket designs and the development of a stand to hold the ticket and tablet in alignment for scanning the QR code.

Lifting the tablet: Many participants found the tablet heavy or difficult to pick up. Creating the stand overcame this issue and meant the only elements they needed to pick up were lighter and easier to move (e.g. Zoom Tickets).

Instructions on screen: In early prototypes, a series of instructions and arrows on the tablet screen pointed to the desired action. When we tested these designs, however, we found many people tried to press the text or arrow rather than what it was pointing to. As we developed the prototypes, we found that keeping the on-screen information and instructions to a minimum made it easier for people to interact with the tablet.

Battery settings: In the first community group session, we noticed that some people were not able to complete their desired action on the tablet before the screen went dark due to battery saving settings. This caused confusion and frustration, particularly if it meant they had to go through a series of steps to get back to where they were. Changing the settings was a simple fix for this issue.

Paper tickets: The paper Zoom Tickets were a distraction for some participants who were keen to keep looking at them.

Assistance: Most participants were able to use the kit to join a call if they were guided through the process step by step.

Noise: The community groups were noisy and bustling with chat. This made it challenging to get participants to focus on the instructions (both verbal and written) for operating the kit and made it almost impossible to hear the conversation on Zoom once they had joined the call. This indicated that a hybrid scenario with some participants online and others in person would likely not be successful.

Aiding navigation: It was helpful to use physical buttons, prompts and labels to point out features on the tablet, particularly when they were small or had little visual contrast. From these insights, we added high contrast and tactile buttons to the home button and added arrows to the volume button on the stand.

Between each community group session, the prototype was iterated and improved based on observations and learnings from the previous session.

Group session 1: We tested an Apple iPad and a Samsung Tablet with a generic QR scanner app installed and a Zoom Ticket.

Group session 2: We tested an iPad and a cardboard stand to hold the Zoom Ticket in place in an attempt to reduce the barrier of aligning the QR code on the ticket to the camera.

Choosing the device (iPad vs Lenovo vs Samsung)

At the beginning of the co-design phase, we purchased three different tablet devices. After testing them internally, we decided the iPad and Samsung tablets were most suitable for testing with community groups, mainly due to better touch screen responsiveness, power up times, video quality and audio quality.

We are confident we could have made the Digital Befriending Kit work with  less expensive Android tablets too but time constraints and practical considerations (e.g. remote device management software, customisation of the stand and supporting instructions) made it preferable to use just one tablet for the pilot.

Although both the iPad and Samsung tablets would have worked, an unresolved bug in the Tap & Chat Android app was causing camera focus problems so, for the sake of expediency, we used iPads for the pilot.

We have continued to develop the Tap & Chat app for both iOS and Android platforms.

Our analysis of all three tablets can be found below.